One of the many excellent advantages of living in the Cité is its close proximity to so many great museums and galleries, many within walking distance.  The George Pompidou Centre, the Carnavalet, the Louvre, the , the Picasso (which was closed) and many more.  Having been to the Louvre at the beginning of my stay, I ticked it off my list, which grew longer and longer each time I met residents who recommended more must-see wonders.
When residents arrive at the Cité they are given a Museum pass and a list of museums at which the holder is entitled to free access.
What can I say?  The French do their exhibitions magnificently- 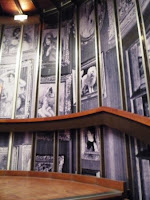 The ‘Renoir au XXe siécle ‘ Exhibition at  Le Grande Palais was beautifully staged, featuring a large collection of his luscious paintings and many old photographs of himself and his family and friends. Monochrome wallpaper had been printed of his paintings and used to paper the walls of the staircases to the exhibition. Impossible to believe that in his later years, despite his hands being crippled and grossly deformed by arthritis and being confined to a wheel chair; he continued to paint and even started sculpture.  He died at the age of  79.
What a pleasure it was to walk straight to the entrance of the Grande Palais, show my museum pass,  et voila go right in and not have to stand in line.
(photography was not allowed in the exhibition, but I snuck this one on the staircase)

The Lady and the Unicorn 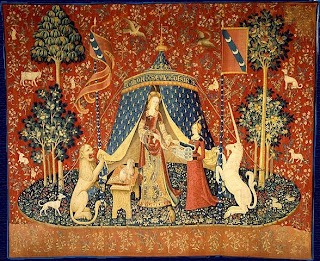 On the left bank is the Hotel de Cluny  which houses the Musée National de Moyen Age, one of the world’s finest collections of medieval art.   It is a flamboyant 15th century manor built on top of 2nd century ruins.   The magnificent stained glass windows were breathtaking as were the six woven masterpieces-  ‘The Lady and the Unicorn’  La Dame a la Licorne depicting the five senses, plus love.  They were woven c. 1500 in . 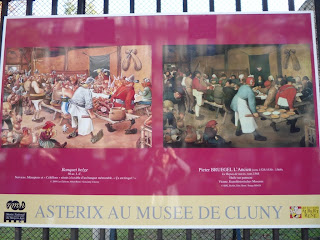 Amongst all this serious religious art, next to the historic excavations, there was an exhibition celebrating the comic “Asterix” 50th anniversary. Intéresser et amusant!
Large metal posters were displayed at intervals along the outer wall surrounding the , each one featuring a famous classical painting.  Next to each painting there was a reproduction of the same painting, featuring Asterix characters.  Eugene Delacroix’s ‘La Liberte guedant le Peuple’,   Breuglel l’ancien’s  La repas de noces’,  which was particularly funny; and Rembrandt’s  ‘La le cor d’anatomie du Prof Tulp’  (except that in the Asterix version, they were examining a fish); were some of the many art works featured.   To further celebrate the event, there were installations in various public areas of the city depicting Asterix’ adventures, such as  piles of dented, bashed up Roman helmets,   huge menhirs  that Obelix carries with him, sign posts indicating the towns that Asterix and the Romans inhabited, etc.  amazed me that so much effort and planning went into that event.
As I said before, the French do their exhibitions in grand style.
I revisited the George  Pompidou Centre especially to see the exhibition of work done by Women Artists.   Apparently only a small percentage of work by women is featured in museums and the complaint is that more often than not women have to be naked to be in a museum.   There were some beautiful paintings, some rather controversial and some very disturbing installations and videos.  Alas, I could not decipher all the labels pertaining to the art works so couldn’t  satisfy my curiosity
One of the video installations featured a naked woman on the beach, arms in the air,  gyrating with a hula hoop.  All very well, except that the hoop was made of barbed wire.  Yep, a length of barbed wire, twisted to form a hoop that ripped her skin repeatedly as it went round and round. Pour quo?  I cannot begin to imagine!   And the woman never flinched! Trés bizarre, non? I couldn’t resist video-ing the video. 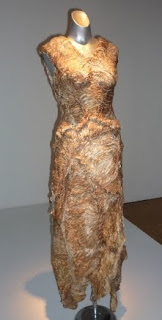 The Steak Dress             There was an installation featuring a mannequin  wearing a dress made of steak.  Yep, ces’t vrais,  slabs of raw meat!   The meat was fresh when it was put together and draped on the model,  by the time I saw it, it had dried out.  What a way to make biltong!  That style in a peachy mushroom-pleated silk chiffon would have looked quite fetching, n’est-ce pas?
Another picture featured the nether-regions of a couple–  naked!  in the act! Yes, in the act I tell you!  The explanation was that the woman in the picture commissioned the artist because she wanted to know what they looked like from that angle.  Ja well o fine!  I was very curious to know how the teachers who were herding a large group of small childre around the museum and explaining various art works handled that one.  Ooh-la-la!
Onse  Marlene had two pictures on the exhibition,  on one she had drawn a scratchy- looking tree with foetuses hanging on the branches called-  what else?  ‘The Foetus tree’. The other one was even worse, but don’t let me start on that topic!
There were many of my favourite Impressionist paintings in other areas of the huge Pompidou centre as well as a special exhibition of work by Pierre Soulages on the top level.  At 15 Euros entrance fee, I decided to give it a miss, but enjoyed the panoramic cityscape from the roof. I later saw a lot of his work at other exhibitions and was glad I had not spent 15 Euros.  Google him and see his work. 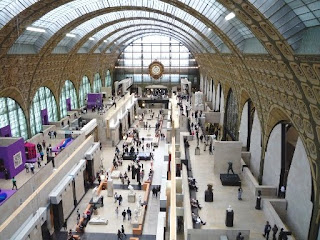 Another of the very beautiful buildings which houses a museum is the Musée D’Orsay.  It was originally the Palais D’Orsay which was burned to the ground by the Communards in 1871. It was an eyesore across the directly opposite the Tuileries gardens and the Palais du Louvre for many years and in 1898 Victor Lalou was selected to build a railway station in time for the World Fair of 1900.   The design of the building with its high vaulted roof was borrowed for ’s Grand Central Station, the Pensylvannia Station and Union Station in . DC.  By 1939, all long distance train travel ceased and the great space was all but abandoned. 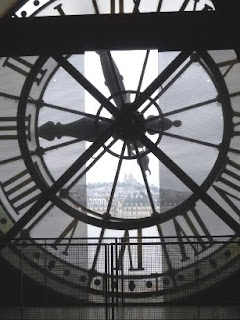 In 1970 plans to demolish the gare were thwarted by an uprising, a peaceable one on the part of the Parisians, who refused to allow another architectural prize to disappear and it was duly entered into the register of historic monuments. ‘ The museum retains the station’s grandeur and offers a unique portrait of the rich and complex period when art- and the world- became modern.’   It is best known and loved for its works by the Impressionists and Post-impressionists and much, much more.
I took this picture of the Sacre Coeur  on   through  one of the two huge clocks that face outward towards the river.  I thought it was quite original?
Pourquoi  did I go to ? Oh yes, to paint.  So far, only my nails!
One of the many beautiful paintings at the Musée D’Orsay.   Quite strange, though! 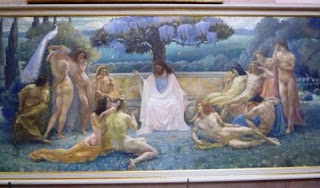 To see a larger version of the posted pictures, just click on the photo.

1 thought on “MUSEUMS AND MASTERPIECES. French Letter 5 by Fula Paxinos”