I love browsing over maps, so I armed myself with a bus map and a Métro map as soon as I arrived. A word of advice, always ask for the No. 2  Métro map which is more detailed and shows the street names as well.   Nevertheless, I figured that a couple of days spent on an open-top bus, with commentary would help me get my bearings quicker.  So on the first clear day, I started the tour.   The tour includes 4 different routes including all the usual tourist attractions in the city.  I was able to hop on and off whenever I wanted to spend more time in an interesting spot.  The commentary was very useful and gave lots of information about the places visited and the history of Paris.  A  trés trés belle Paris.  The staggeringly beautiful monuments and mindlowing architecture aesthetically embellished with magestic sculptures.   How could such a beautiful city have had such a turbulent and violent history?    I have to admit that I was quite appalled.  Mon dieu  So many uprisings, revolutions, wars, sieges and the Commune.  Not to mention the devastating Black Plague which wiped out more than a third of the City’s population.   It really was horribly gruesome and at times I preferred to listen instead  to the other tourists’ conversations around me.
In one group of Australians the men begged their wives at every stop, to get off the bus and have a couple’ a biers.  I enjoyed the tours but felt that walking and taking public buses would be almost as good.   And  trés cheaper!
On the next sunny Saturday morning I set off for the Rue Mouffetarde street market.  Mostly food and bistros and a few clothing sellers so didn’t spend much time there.   I then walked to the Pantheon, one of Paris’s most impressive buildings, and from there found my way to the Jardins de Luxembourg. 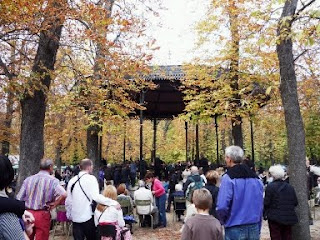 Straight ahead amongst the trees which were every shade of autumn was a lovely old Victorian style bandstand. The musicians were setting up their instruments and a large crowd gathered.  I found a seat and spent the most blissful afternoon, pleasantly warm, enjoying the scene and listening to the coolest jazz. C’est une image très agréable, non?  How I wished my son-the-musician was with me.  When the concert ended, I walked through the gardens, admiring the large pond with its fountains sparkling in the late afternoon sun, and the elegant statuary.   There were crowds of people enjoying the sunshine and many couples embracing, lip-locked and oblivious to passers-by, in the gardens and anywhere and everywhere.  C’est Paris?  Sans doute!
Sunday morning was also very pleasant and I set off for a long walk along the Seine.  The roads along the banks of the Seine are closed to traffic on Sundays and the inhabitants take full advantage.   People fishing,  children playing and  riding bicycles,  families picnicking,  lots of dogs running around with their owners, families of swans and ducks gliding along, and the ubiquitous couples snogging.  I saw an elderly woman with a strange looking black ‘dog’ on a leash.  It was walking ahead of her, lifting its feet very delicately at every step and had its tail straight up in the air.  Then I realised why the dog looked so strange-  it was a cat!
Another large woman in a very colourful flamboyant dress had a parakeet on her shoulder and she was dancing along to a tune in her head, with the parakeet squawking and hanging on for dear life.   Barges, and boats full of tourists floated by, artists were painting the lovely scenes- the multicoloured trees along the banks in every shade from rust, through red to darkest maroon.
Another magnificent ‘automne d’or’ day. 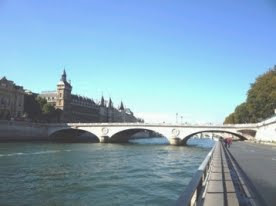 While walking, I was able to take a closer look at the large abstract pictures that looked as if they were painted on the sides of the bridges and along the walls on the banks of that stretch of the river.  I could not figure out what they were only that they were in shades of grey to black and featured large intense eyes.  I found them rather disturbing and couldn’t believe that so much graffiti had been allowed.  Till I found out that all those pictures had been painted by an artist who does that sort of installation art world wide.  The pictures were printed on large sheets of paper and were pasted in place.  This particular exhibition was meant to honour women that he had met who were living in difficult situations and appalling conditions.  He had been extremely impressed by the strength of the women and felt that their eyes told their    stories.  What an amazing tribute.
I made my way back along Blvd St Michel and eventually found the ‘Shakespeare and Company’ book shop.  It was opened by an American- Sylvia Beach in 1920 and despite several changes over the years, it still exists.  It was famous for its Sunday afternoon tea parties.  The upstairs area is a reading room with large armchairs and couches and has sometimes been home to students far from home.   As I stumbled up the narrow staircase I saw a book displayed on a music stand at the top of the stairs.  It was by Ronald Searle, one of my all time favourite cartoonists since my schooldays and the St Trinian stories. I was overjoyed to find one of his books that I had not read.  I settled down in the least dilapidated chair I could find and enjoyed his wickedly funny cartoons.  When I left I stopped off at a Greek food stall to buy a snack and was able to HAVE A CONVERSATION with someone.   What a pleasure, not very in-depth, but nevertheless, a conversation.
Later that evening on my way to mass at the Notre Dame Cathedral on Ile de la Cité  I  crossed  Pont Marie at just the moment of le crépuscule.  I stopped dead in my tracks and was stunned by the view of the river. The exquisite opalescent pink light that exists only in that magical time between day and night was reflected on the water and highlighted the roof of a boat that was cruising towards Pont Louis Philippe. It was a scene begging to be painted and which would be over in minutes.   I whipped out my ever-ready camera and snapped away as a gold wash briefly brightened the pink which then darkened through cerise into the velvety purple colours of night.   I was spellbound, even more so later while listening to the soaring angelic voices of the choir in Notre Dame Cathedral.  So much beauty to see and hear.  Absolument magnifique!  Did I mention in a previous letter what a privilege it was to be there?  Well I’ll say it again; it was indeed a great  privilege to be there!

I planned to start painting when the weather got really miserable.  So far it hadn’t – so I didn’t!
Fula Paxinos