Ivanonia Keet, or Iva Roworth as she’s known in the art world, is one of our oldest members and continues to paint up a storm!  She sold her latest painting at our recent Annual Exhibition.
Iva has been painting her all life and her paintings are in collections all over the world.  So it was especially nice when Lynn Brown received this email from the United Kingdom from the wife of one of South Africa’s greatest cricketers!
Dear Ms Brown
A little story for you!
I was married to Eddie Barlow, the late springbok cricketer and we lived in South Africa before moving to Wales after he had a stroke.
I loved attending auctions which Eddie had not done before and on a visit to Wynberg in 1995, I spotted a lovely painting of cottages in Elim, Somerset West.  I told him I thought the picture was quite divine and was going to bid for it.  He asked how much I was going to bid and I said “Well, I really do like it so I will bid up to R1000”.  He said if it went for R500 he would buy it for me.  I got the picture for R350 much to my amazement because I was going to bid more than my R1000 if I had to!  On a surf on the internet today I found that one of Ivanonia Roworth’s pictures fetched over £3,000!!
I could photograph my picture if you would like to see it.
Kind regards
Cally Barlow 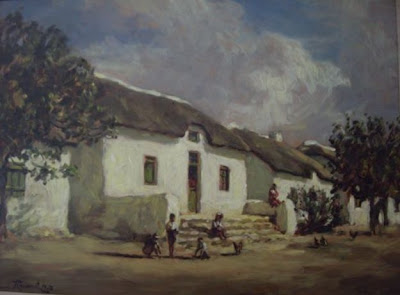