MEANWHILE BACK AT THE CITÉ    French letter 6 from Fula Paxinos
My studio on the 1st floor had floor to ceiling windows and I placed my work table in front of them and was able to watch a never-ending passing show of traffic (including hundreds of Renaults just like mine)  cyclists, motorcyclists, streams of pedestrians, school children, rollerbladers and huge tour buses disgorging groups of tourists,.
The leaves on the tall trees along the pavement outside the building have all changed into glorious autumn colours and have started falling in earnest.  Pretty soon I will have a perfect view of the magnificent Notre Dame Cathedral.
A couple of nights ago, I heard  an eerie swishing noise, almost like a very long gust of wind.  To my surprise a river of rollerbladers , hundreds of men, women and children, with a police escort were cruising past.  Nobody at the Cité  had any idea who they were or where they came from.
The swans on the river, the many tourists boats and the Bateaux mouches, whose rows of search lights illuminate the river banks at night add to the constant activity- which I love.
There also seem to be thousands of little Smart Cars on the road.  They are all very brightly coloured and patterned and from my window they look like Dinky toys.
Across the road on the pavement above the river bank are the book sellers stretching all the way to Pont Neuf and beyond.  The vendor directly opposite my windows intrigued me. He had a guitar, and when not talking to a possible customer or friend, he strolled and danced up and down the pavement, strumming and singing.  A dark haired woman often came to visit him and brought lunch and a bottle of wine. They would sit on the bench nearby and spend a couple of hours eating and chatting.  That stopped and soon a blonde woman took her place and visited every day.  They were far more amoureux, she was either snuggled up on his lap with her arms around him, or cuddled up next to him.   Then she stopped coming and he went back to playing his guitar. Who were the women? Why did the blonde stop coming?  Did her husband find out?     An interesting video art installation could have been created based on Monsieur le Bookseller’s shenanigans! 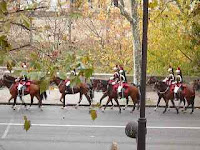 The President’s Guard
Several times during my stay I heard the clip-clopping of horses hooves along the road.  From my window I was able to watch the President’s Guard riding by.  About 100 splendid horsemen in scarlet and black regalia on their richly caparisoned horses.  What a splendid sight!  Luckily I was able to capture it on video.
Along the block in front of the Cite the road is called rue de l’Hotel de Ville.  Beyond that the pavement is very wide and accommodates a cycle track and benches surrounded by low hedges.  The benches were very often occupied by couples wrapped around each other, and homeless people who made their beds there every night.  Beyond the broad pavement is the road that runs along the top level of the Seine.  What impressed me very much was how frequently the pavements were cleaned.  The weather was getting colder and the trees had started shedding their leaves.  Almost every day a strange looking vehicle would come along and the operator would blow all the leaves into piles, another weird vehicle would come along and vacuum them, and others would thoroughly wash down the pavement.  Frequently, I’d wake up to the noise of electric tools being used to neatly trim the hedges.  What impressed me most was how meticulously the workers did their jobs.
Just before the end of each month there was a spate of Open Studios in the Cité .  Sometimes 2 on the same night.  Then it was dead quiet till the new intake arrived and started producing work. Any kind of work, including video installations and musical stuff-  Pedro Morales from , picked up bits and pieces in the streets, old pots, buckets, even a bed base with springs, and scraps of bicycles, connected them to his computer and somehow they vibrated and produced the strangest sounds. He entertained us to a ‘musical’  evening at his open studio.
A tiny, cute, smiling, bowing, Japanese girl called Midori exhibited her very tiny, cute illustrations.   I had invited my friends Desmond and Marianne Colbourne to join me and visit an open studio.  Midori could not speak one word of English and her interpreter managed very little English.  They were overjoyed when Desmond spoke to them in Japanese.  Marianne chatted in Swedish to a Swedish sculptor at the party,  Carla a photographer from spoke fluent French to several other guests and we were all able to speak Afrikaans to a Dutch couple.  What a fruit salad!  The party continued with more snacks and drinks chez moi afterwards, and Desmond gave me lots more information about where to go and what to see. 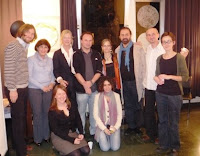 Metka the little woman standing in the centre had an Open Studio to show her paintings on  her round hand-made papier mache supports.   Only 2 of the 10 artists in the picture have the same nationality.
Although I had done a 6 month course at the Alliance Francaise in and done all my homework, and tried hard in class,  not very much stayed in my memory from one lesson to the next.  Horrific grammar and verbs, almost as difficult as Greek. I had acquired a set of language CD’s which I found easier and also decided to go to French lessons at the Cite.  It was recommended as a good place to meet people.    I went to one lesson only.  The teacher only spoke French and I daresay that  after about 100 lessons, I might have learned to speak French,  but I felt my CD’s were easier, and I did meet ‘friends’ at that lesson.
Current Friends, their Nationalities and the languages they spoke. 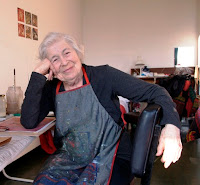 Alice Goldin from who had been to the Cité  6 or 7 times, and her grandson Max arrived there shortly after I did and were the most wonderful friends. It was a blessing having their company.   is a Gold mine of information, her memory is phenomenal and she advised me on what to see, where to go and how to get there.  We had dinner together several times, my famous salmon pasta and my omelettes and Max’s excellent soups.  put me to shame by starting painting as soon as she unpacked and Max too was very busy drawing his illustrations. Max took good care of his gran and it was a treat to see them both working diligently on their individual projects and swapping crits.  Carla, the photographer did a lovely portrait of in her studio.   Apart from her long friendships with the personnel at the Cité,   also had friends in and despite problems with her hip; she gamely managed to get out and about.  However, she had to leave earlier than planned and I had a little farewell dinner for her in my studio.
Portrait of Alice Goldin by courtesy of photographer Carla Crafford
Although I hadn’t put brush to canvas yet, I did put up large photocopies of my wax paintings  and picture boards with photos of glorious sunsets taken from my balcony at home and photos taken from the end of my road, of and beaches.  My visitors were all absolument fascinated!
Fula Paxinos